Highest Opening Day Collection In India: As morning shows the day, 1st-day box office collection of a film shows star power. And in recent years, Bollywood has been seen to set a new bar in terms of the first-day collection. Before 10 years ago maximum Bollywood movies were used to collect in 30-50 Crores during their lifetime run. But in this Multiplex era, 30-35 crores opening day for any Superstar’s ( Khans ) movie is very conventional.

For now, the biggest opening day record is on the name of “Bahubali 2 – The Conclusion“. The movie was released on a normal working day 28th April 2017 despite being Non – holiday release still able to touch the magical number 40 crores Beating Salman Khan‘s starrer “Prem Ratan Dhan Payo” which was a Diwali released & collected 39.32 crores on its 1st day. This Salman Khan’s starrer movie was also released on more screens (4200) compared to “Bahubali 2 – The Conclusion” (3950).

Below table shows the all-time highest grosser 1st-day collection Bollywood movie In India with the screen count. Highest opening day collection shows who is the master of box office collection…

In top 10 highest grossing opening day collection list, only Salman Khan has registered his name for 4 times ( Prem Ratan Dhan Payo, Sultan, Tiger Zinda Hai, Ek Tha Tiger) this shows his sheer stardom Which is unmatchable. Salman Khan’s starrer “Ek Tha Tiger” was the 1st movie to collect 30 crores on it’s opening day from only 3200 screens. The only Indian movie to witnessed 100% occupancy all over India on its opening day. 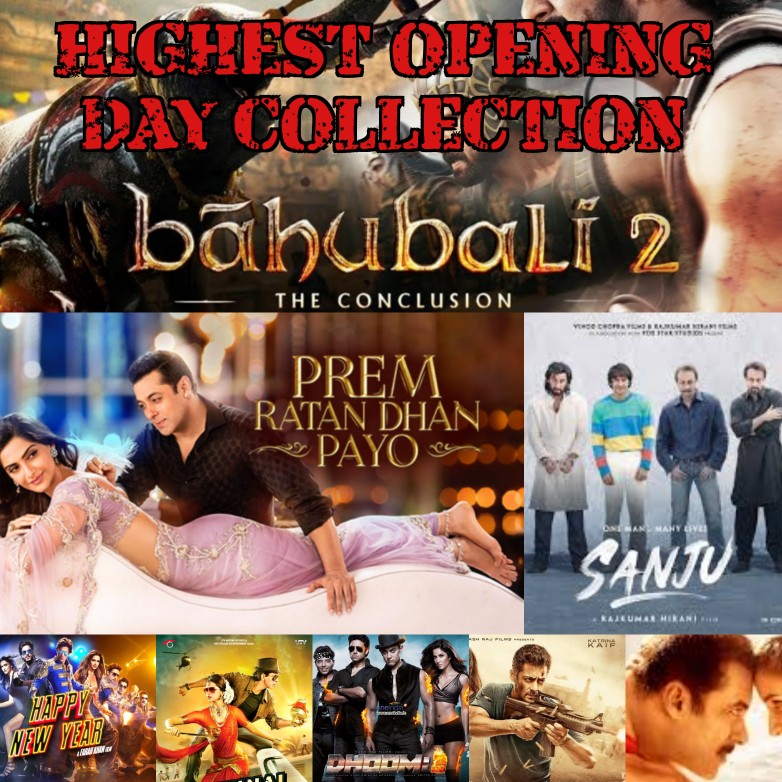 As we all know Salman & Shahrukh are the biggest superstars of India. So after Salman Khan, Shahrukh Khan is the only star who have multiple movies in the list of Top 10 1st day collection of all time. Both the movies were released on Festival “Chennai Express” on Eid day & “Happy New Year” on Diwali. Aamir’s “Dhoom 3”, Ajay’s “Singham Returns”, Ranbir Kapoor’s “Sanju” also got a place in the list.

Note: If anyone finds any data is incorrect, then feel free to share your ideas and data with the source with us. Our team will try to modify the mistake (If available).